The Risks of Vaping and JUULing 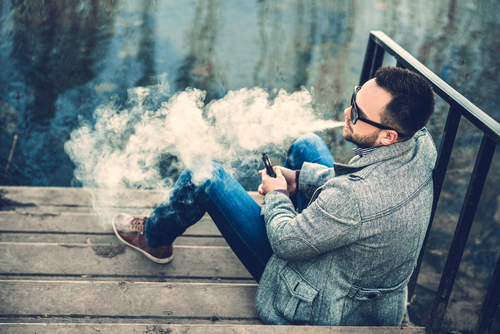 In recent years, there has been significant movement in addressing smoking in the United States. Rates of smoking in the United States had been steadily declining, but the introduction of electronic cigarettes has caused nicotine addiction to reach an entirely new generation. Marketed as a smoking cessation device, e-cigarettes are popularly depicted as a useful tool to help those looking to quit smoking; however, the use of delicious flavors and false advertising regarding safety has changed the landscape of addiction and produce the opposite effect.

E-cigarettes are electronic devices that come in numerous shapes and sizes. They may look like a traditional cigarette or resemble other devices such as a pen, a USB flash drive, or may be in a small tank system. Known by a variety of names like e-cigs, vape pens, vapes, and tank systems, the use of an e-cigarette is commonly referred to as “vaping” or “JUULing”. Much like a traditional cigarette, a person will inhale to smoke, but the liquid used in these devices contain nicotine and a variety of flavors. This makes them appeal to a wider variety of users.

The Truth About Vaping

E-cigarettes are commonly marketed as a safe alternative to smoking cigarettes, but there are still risks involved in using it. In fact, many e-cigarette brands are owned by tobacco companies which further indicates that the purpose of cessation may not be entirely accurate. While some report that e-cigarettes contain less chemicals than e-cigarettes, these electronic devices still contain flavoring and other chemicals that mix with nicotine. Despite how they are popularly depicted, the reality of vaping or JUULing is:

While the long-term consequences of e-cigarette use are largely unknown, the evidence uncovered so far suggests that e-cigarettes may have a dramatic impact on a person’s overall health. Many studies thus far suggest that e-cigarette usage, especially early in life, can put a person at an increased risk to smoke more frequently in the future and may increase the likelihood of smoking traditional cigarettes in the future.

Regardless of the marketing used around these devices, e-cigarettes are not regulated by the FDA and this lack of oversight can potentially put many people at risk for exposure to dangerous chemicals. With varying levels of nicotine, discrepancies in formulation, and the presence of other chemicals, it is impossible for someone to truly know what they are exposing themselves to, making it potentially more harmful than what it is currently represented to be.